Stuff They Didn't Teach Me In Sunday School (Vol. 9)... About Letters To This New Church 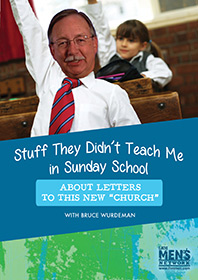 In this 9th (and final) collection of "Stuff...'" viewers get an inside look into what the earliest Christians experienced.

The believers who carried on the work of Christ following His ascension were an assembly of various peoples-Jews, Gentiles from throughout the Roman world, and foreigners from the fringes of empire. These scattered assemblies of believers, these "churches" were the recipients of many of Paul's letters: Galatians, Ephesians, Corinthians, Colossians, Thessalonians, etc. In addition to these epistles, Paul offered words of instruction and comfort to individuals as well: Timothy, Titus and Philemon. Beyond Paul's 13 letters, and not including the four Gospels or Acts, there are works attributed to Peter, James, John, Jude, the book of Hebrews, and the New Testament's closing opus-the book of Revelation. Taken together these 22 texts provided the early church with vital teachings on Christ's divine nature and redemptive mission; the eternal hope all sinners share through Jesus' crucifixion and resurrection; numerous examples of Christian conduct and how to live out one's faith in this world; detailed accounts of Paul's missionary journeys and his interaction with churches and individuals under his guidance; and, last but not least, a glimpse of end times as given in the book of Revelation.