Stuff They Didn't Teach Me In Sunday School (Vol. 6)... About Matthew and Mark 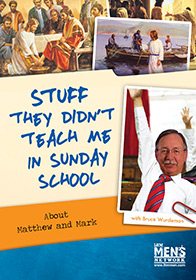 This is the sixth DVD in the "Stuff" series. Join Bruce Wurdeman as he bridges the gap between the Old and New Testaments and launches into the Gospels, beginning with the books of Matthew and Mark.

The 400-year period of transition between the Old and New Testaments witnessed significant changes in Israel's history and cultural development. During this time, superpowers like the Persians, Greeks and Romans were the dominant geopolitical players in the regions of the Mediterranean and the Near East. In Palestine, groups like the Pharisees, Sadducees, Zealots, Essenes, and others fill the stage, vying for local power and prestige. Into this milieu comes Jesus, the Word Incarnate, who-along with His disciples-would change the world forever.