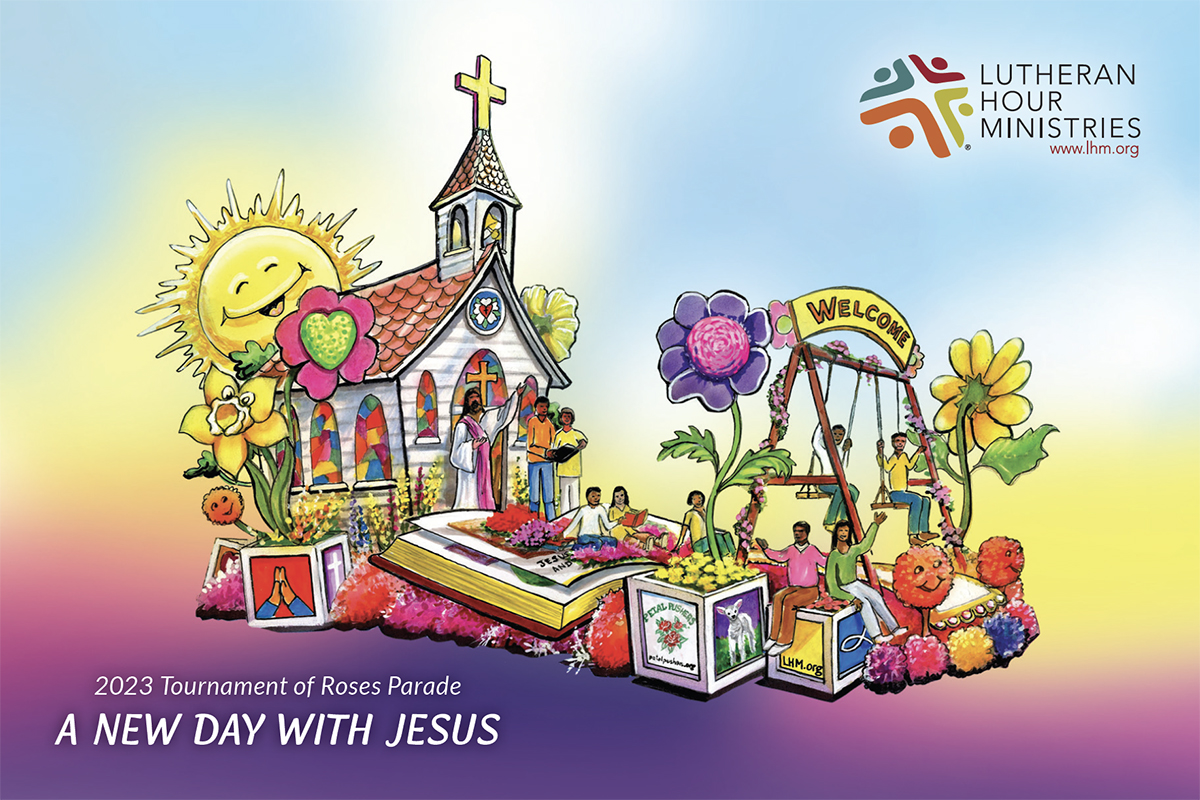 In keeping with its "Never on Sunday" tradition followed since 1893, the 134th Tournament of Roses Parade will be held on Monday, January 2, 2023, in Pasadena, California, under the theme of "Turning the Corner." The iconic annual parade, beginning at 8 a.m. Pacific Time, will feature marching bands from throughout the United States, high-stepping equestrian units, and dozens of majestic floral floats.

Lutheran Hour Ministries will participate for the 72nd time with a float entry titled "A New Day with Jesus." A new day is dawning on this year's float, as the sun rises from behind a church and families gather. The steeple directs our eyes upward to the cross of Christ and the stained-glass windows tell the story of how God is making all things new. Jesus stands at the open doors of the church ready to welcome everyone into His fold, where He promises to make Himself known in the gathering of His people, the reading and proclamation of His Word, and participation in His Holy Baptism and Communion. With this year's float, viewers are invited to meet-or meet anew-the Source of hope and joy that cannot be taken away by anything that the world throws at us.

As a self-funded project of the Lutheran Hour Ministries Float Committee and the Southern California District of the International Lutheran Laymen's League, the LHM float is the only Christian float in the annual parade. The float carries on a mission to provide a Gospel witness to viewers everywhere, from the 5.5-mile parade route in Pasadena to televisions and computers around the world. There are several television channels, streaming outlets, and social media platforms televising the 2023 parade, including the Hallmark Channel, ABC, NBC, RFD-TV, Univision, AT&T TV Live, Hulu Plus Live TV, Peacock TV, and Sling TV. Check your local listings for the best viewing options.

Hundreds of individuals are still needed to help decorate the LHM float as well as others completed by the Petal Pushers' decorating team of around 4,000 volunteers. Petal Pushers volunteers must be at least 13 years old and commit to at least one eight-hour shift during the month of December.

To learn more about the LHM float, volunteer opportunities, or ways to support this project, visit petalpushers.org.