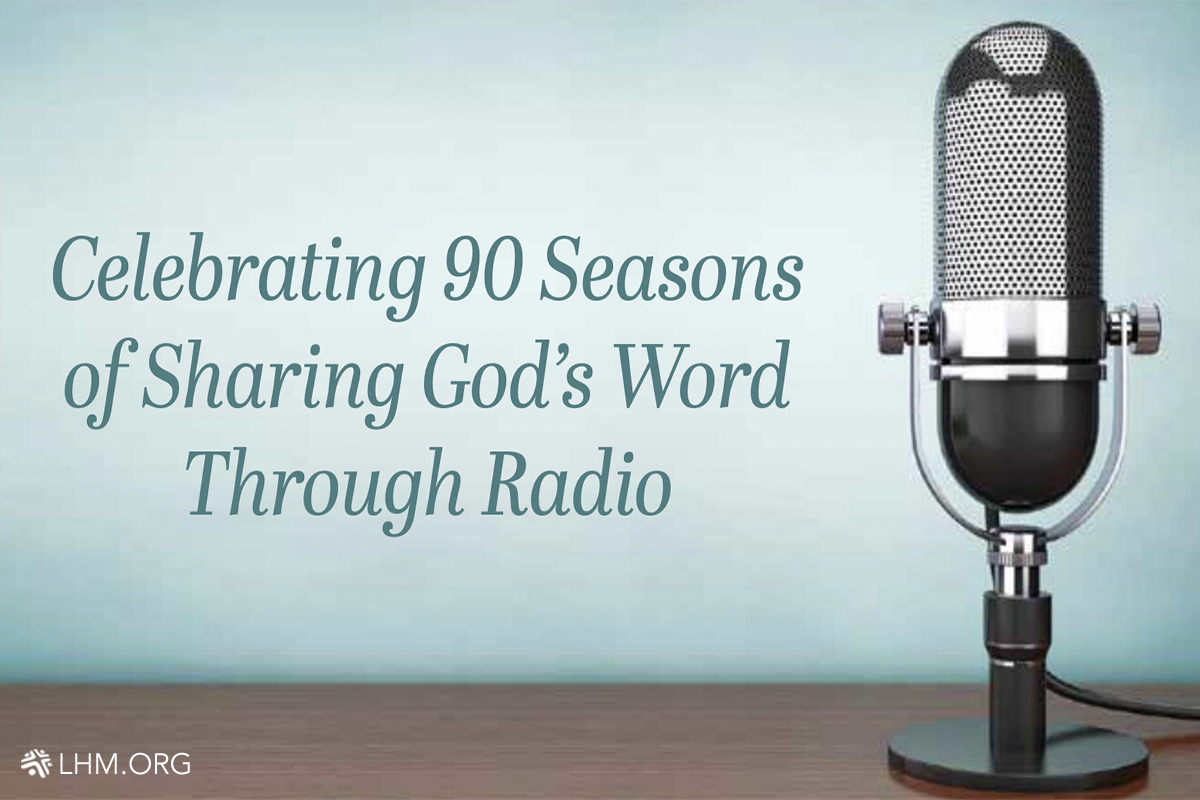 The first broadcast of The Lutheran Hour® radio program was aired on October 2, 1930, with Dr. Walter A. Maier as Speaker. The Lutheran Laymen's League (LLL), which had formed 13 years earlier, shared Maier's vision of spreading the Gospel message using the young technology of broadcast radio and raised funds through its few thousand members for "the boldest undertaking ever conceived by a body of American Lutherans."

In his initial message titled, "There is a God!," Maier announced, "the Lutheran Laymen's League is conscious of but one purpose, actuated by one impulse: the consuming desire to hold up the Cross of Christ of Jesus Christ to the 120 million people of our nation as the only but all-sufficient source of salvation, both spiritual and temporal."

Those words are as true today as they were in 1930. As The Lutheran Hour began its 90th broadcast season in September 2022, it is evident that Maier's desire for the public preaching and teaching of the Gospel so that all might believe and know life in His Name left a legacy of outreach that has reached into the homes, hearts, and lives of countless millions over succeeding years.

Nothing would deter him from sharing the message of Jesus when people's souls were in the balance. Even when financial problems put the broadcast on hold from 1931 into early 1935, Maier's dream of using radio to preach the Gospel would not die. In February 1935, the program returned to the airwaves, this time on an early network of 11 stations in the Mutual Broadcasting System.

Maier's preaching style blended solid biblical theology with practical application and intriguing examples from the past and present to establish a bond between the broadcaster and his audience. Listeners responded in droves, not only by tuning in each week, but by mailing in letters and donations.

The broadcast's immense popularity in the late 1930s paved the way for the LLL to take the Gospel message overseas with the beginning of foreign language broadcasting. Dr. Andrew Melendez was elected in 1941 as the Spanish Speaker to bring the Good News offered through The Lutheran Hour to Latin America, Spain, and cities in the United States with Spanish-language radio stations. While Melendez spoke in a different language to people of a different culture, the call of Christ remained the same and opened additional doors for the use of radio as the ministry known today as Lutheran Hour Ministries (LHM) expanded around the world.

Broadcasting a Timeless Message
Even Maier's death in January 1950 did not halt the program's progress. That should be no surprise for a program that offers a weekly message that is timeless and life changing. Whenever a new Speaker stepped behind the microphone, The Lutheran Hour may have changed in style of delivery, but not in solid content. God's Word was still being delivered under the Lord's direction whether Dr. Maier, Dr. Melendez, Dr. Lawrence Acker, Dr. Armin Oldsen, Dr. Oswald Hoffmann, Rev. Wallace Schulz, Rev. Dr. Dale Meyer, Rev. Dr. Ken Klaus, Rev. Dr. Gregory Seltz, or Rev. Dr. Michael Zeigler shared it.

"The beauty of the program is that the messages stand the test of time," says Jim Arand, audio development manager for LHM. "You could preach any of the messages from through the years and just replace the different life situations that are happening. They would still be relevant because Jesus is still relevant. Jesus is still the same. While our lives change, Jesus is that permanent stability. He is that security for our souls, our lives, and our future. And as we live in the insecure time of today, we have that spiritual certainty and security in Jesus."

Sharing God's Word with Those Who Need to Hear It
Today, Zeigler and a variety of guest speakers continue to get to the heart of the matter through the weekly broadcasts. They preach Christ crucified, salvation, restoration, and reconciliation with God in His Name! They preach this message because it is the foundation of new life, eternal life, now and forever.

As the broadcast recently entered its 90th broadcast season, each message reaches hundreds of thousands of people each week, one person at a time. Countless people have come to faith, are sustained in their faith, or are encouraged in their faith just by listening each week.
* Chuck says, "One morning near the end of my 35-year wandering like a stiff-necked Israelite, I woke up and turned on my radio to WGN in Chicago and your broadcast came on. This was the first seed planted in me to come back to church. Thank you for sharing the Good News!"
* Even though Bill and his wife are Southern Baptists, they listen to The Lutheran Hour every Sunday morning on TuneIn as they get ready for church. "We are always encouraged and edified," he says. "Praise to our Lord Jesus for making your broadcast available to us!"
* Marilyn listens to The Lutheran Hour each week on a local radio station. She shared that she is mostly homebound and starts every Sunday morning with the broadcast.
* James works on T38 jets at an Air Force base in Texas and has been a long-time listener of The Lutheran Hour. He says that some of his earliest memories as a child are being at his grandparents' house in Chicago while his grandma listened to the broadcast. Now, when he goes out on Saturday mornings to do inspections, he puts in his earbuds and spends time with the Lord by listening to the radio program. He said at times, he stops what he is doing so he can pay attention to what Rev. Zeigler, or the guest speaker, is saying while lying under a jet.
* Judy shared that Dr. Oswald Hoffmann had a profound effect on her young life in becoming a child of God, just as Rev. Dr. Michael Zeigler now has a profound effect on her in the latter years of her life. "These two men are the bookends of my Life in Christ," she says. "Their sermons, as well as those from all the Speakers in between, have been so meaningful to me! I love how God has used them to put His Word into pictures through the years. Thank you for being God's messengers."
* Kevin is a college student who recently started listening to The Lutheran Hour during his daily drives to school. He says the program has helped him grow in his faith.
* "Reverend Zeigler continues to bless so many with his Christ-centered, 'down to earth' style of sharing God's grace through His Son, our Lord Jesus Christ! I really appreciate how the sermons speak so powerfully to my own struggles," says Robert. "Many of the messages have smashed through my heart, making me realize how full of pride I am and in need of repentance. Still, the Lord loves me in that He calls me through His Law to repentance and then through the Gospel to forgiveness and restoration. Glory be to God for His amazing grace! Thank you to Rev. Zeigler and The Lutheran Hour for offering so many sermons that have been what I needed to hear and just when I needed to hear it!"
* Joseph was recently introduced to The Lutheran Hour by a friend who is Lutheran and has become more fervent in his faith as a practicing believer over the past several months. His eyes are now open, he is "on fire" for the Lord, and he is very appreciative for the part The Lutheran Hour has played in his new walk with Christ. He even plans to go with his friend spreading the Word among people in his local community soon.

Paving the Way for Global Outreach
Even as LHM invests in new outreach strategies, radio continues to play a significant role in our global efforts. Today, in addition to The Lutheran Hour being broadcast on more than 1,800 traditional radio stations throughout North America, LHM ministry centers around the globe offer many locally produced, topical programs, and syndicated episodes that encourage a wide variety of audiences to contact LHM to learn more about the Gospel. These programs attract a wide variety of audiences and invite listeners and viewers to contact the local ministry center to receive resources that address the topic from a Christian perspective, along with opportunities to take a Bible Correspondence Course (BCC) and connect with a local Christian community. The staff member may also offer to pray with the new contact.

This more than a century-old medium continues to positively impact millions of lives every day - and illustrates why we need it today more than ever. Notably, radio represents a focal point for community life, accessible even in the most remote and underserved locations. It has been said that more than 90 percent of the world's population currently has access to radio.

"Radio can cross borders and reach into the homes, workplaces, and vehicles of people almost anywhere in the world, which is why it continues to be an important strategy in our global ministry efforts," says LHM President and CEO Kurt Buchholz.

Where You Can Listen to The Lutheran Hour Today
The Lutheran Hour is available today in many other ways than traditional radio. From the American Forces Network and Sirius XM satellite radio, to lutheranhour.org and a podcast, to new media platforms like Amazon Alexa, Spotify, iHeartRadio, and more, listeners can hear the weekly sermons whenever and wherever they are. In addition, an archive at lutheranhour.org provides immediate access to sermons from the past couple of decades as well as selected historic sermons from past Speakers. SENT Radio (lhm.org/sentradio) provides around-the-clock archived sermons from all Speakers of The Lutheran Hour, as well as hymns, contemporary music, Scripture readings, morning prayers, and evening vespers.

December 4
Paradise Restored
If God is love, what are we to make of God's wrath?

December 11
Beauty We Can't See
We often feel our need for God's presence only when we see what it looks like when He's absent.

December 18
Gestures of Hope
Dr. Michael Zeigler shows how even the smallest acts of kindness can go a long way, by God's grace.

December 25
A Shoot from the Stump
A shoot springs forth from the stump of Jesse. Is it a sign of hope-or a threat?

Find a station near you at lhm.org/guide.