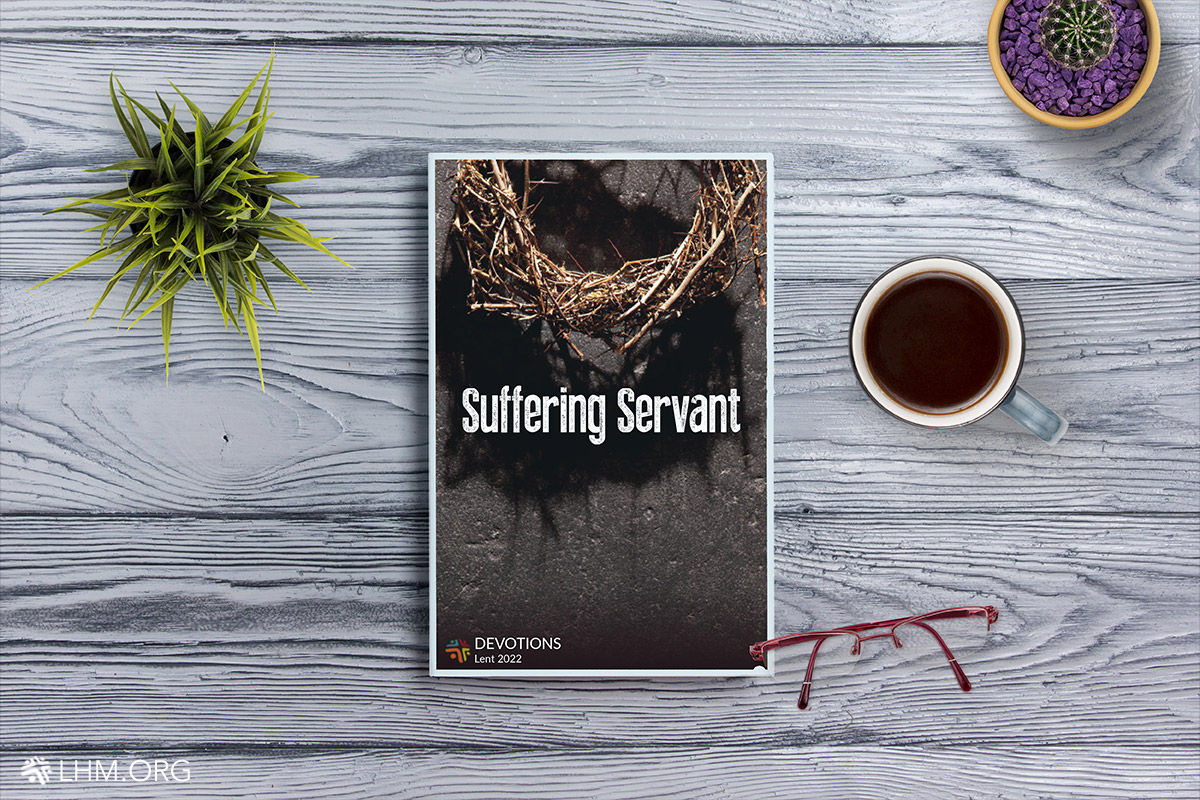 With Christmas 2021 not long behind us, LHM's 2022 Lenten devotions by LHM's Theological Writer Dr. Kari Vo, Suffering Servant, now direct our thoughts to Christ's redemptive work on the cross. As in Vo's well-received Daily Devotions, each day's meditation is based on a Scripture verse that centers our focus on the Christ, God's Son, our Savior.

From the first devotion, "Servant of the Lord," Vo speaks of Jesus as a person people wouldn't expect. Even though centuries earlier, Isaiah spoke of Him as a "Man of sorrows and acquainted with grief; and as One from whom men hide their faces," people didn't get it. No surprise, really; chances are we would have missed it, too. After all, the appeal of One "despised and rejected," full of "sorrows and acquainted with grief," only goes so far-even if He was to bear "the iniquity of us all."

Vo writes, "Jesus wasn't what people were expecting. In God's eyes He was like a root out of dry ground-we would say, like a drink of cool water on a hot day. But to us? He was nothing special. And so we ignored Him-rejected Him-and then turned on Him and put Him to death on a cross. That was the end of Him, we thought. Who could have predicted the resurrection?"
Indeed, who? Who could have predicted that atonement for our sins would come from the death-and coming back to life again-of God's own Son? But that's the grace of God at work-giving us what we don't deserve, rescuing us from what we do. Throughout these devotions, Vo shows a Savior at work-welcoming, enduring, healing, forgiving, persisting in His push to the cross and the glory that awaited three days later.

Suffering Servant can be read or heard, beginning Ash Wednesday, March 2, 2022, at lhm.org/lent. You can also receive these devotions as a daily email during Lent. This year's original Spanish devotions, Por ti y por mí (For You and for Me), can also be read, heard, or received as a daily email, beginning March 2. These have been written by Rev. Antonio Schimpf, a member of the Evangelical Lutheran Church of Argentina (IELA). As in years past, Rev. Héctor Hoppe reads the texts. Go to paraelcamino.com/cuaresma for the details. English and Spanish versions can be downloaded and printed for personal or group use, and LHM encourages you to do so.