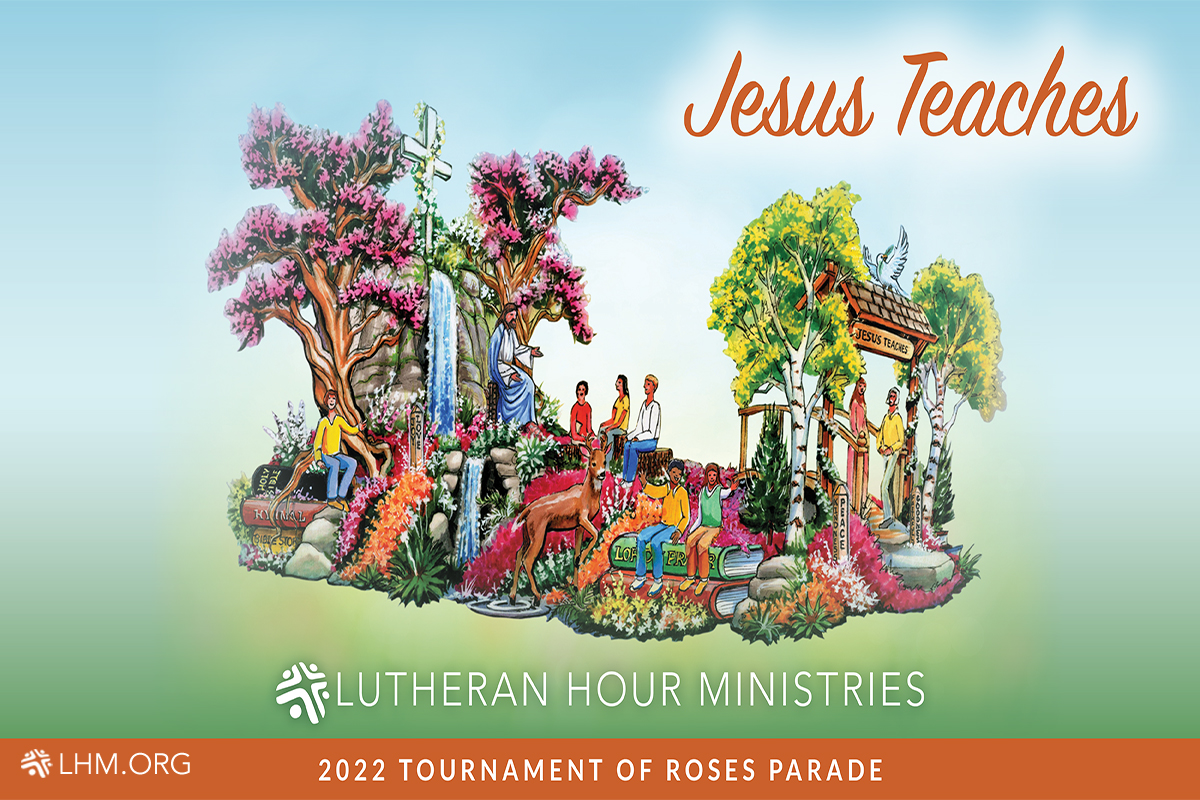 After a one-year hiatus due to the COVID-19 pandemic, the Rose Parade presented by Honda returns Jan. 1, 2022, with all elements originally planned for the 2021 parade. Under the theme of "Dream. Believe. Achieve.", the 2022 Rose Parade will take place at 8 a.m. Pacific Time on New Year's Day in Pasadena, California, and feature spirited marching bands from throughout the nation, high-stepping equestrian units, and majestic floral floats.

Lutheran Hour Ministries will resume its more than 70-year tradition of participating in the parade with a float entry under the theme of "Jesus Teaches." This year's LHM float will feature Jesus with 12 modern day disciples based on Matthew 11:1 (After Jesus had finished instructing his twelve disciples, he went on from there to teach and preach in the towns of Galilee) and a cross that is firmly fixed to a solid rock from which flows a stream of living water based on John 4:10 (Jesus answered her, "If you knew the gift of God and who it is that asks you for a drink, you would have asked him and he would have given you living water").

This year's float riders will include Dr. Kurt Senske, chairman of the LHM Board of Directors; Nicole Heerlein, LHM's associate director of external relations; Debbie Larson, president of the Lutheran Women's Missionary League (LWML); and pastors and laypeople from throughout Southern California.

As a self-funded project of the Lutheran Hour Ministries Float Committee and the Southern California District of the International Lutheran Laymen's League, the LHM float is the only Christian float in the annual parade. The float carries on a mission to provide a Gospel witness to viewers everywhere, from the parade route along Pasadena's Colorado Boulevard to televisions all over the world. There are several television channels, online platforms, and social media platforms televising this year's parade, including the Hallmark Channel, ABC, NBC, RFD-TV, Univision, AT&T TV Live, Hulu Plus Live TV, Peacock TV, and Sling TV. Check your local listings for best viewing options.

Hundreds of individuals are still needed to help decorate the LHM float as well as others completed by the Petal Pushers' decorating team of 5,000 volunteers. Petal Pushers volunteers must be at least 13 years old and commit to at least one eight-hour shift during the month of December.

To learn more about the float, or volunteer opportunities or ways to support this project, visit petal pushers.org.