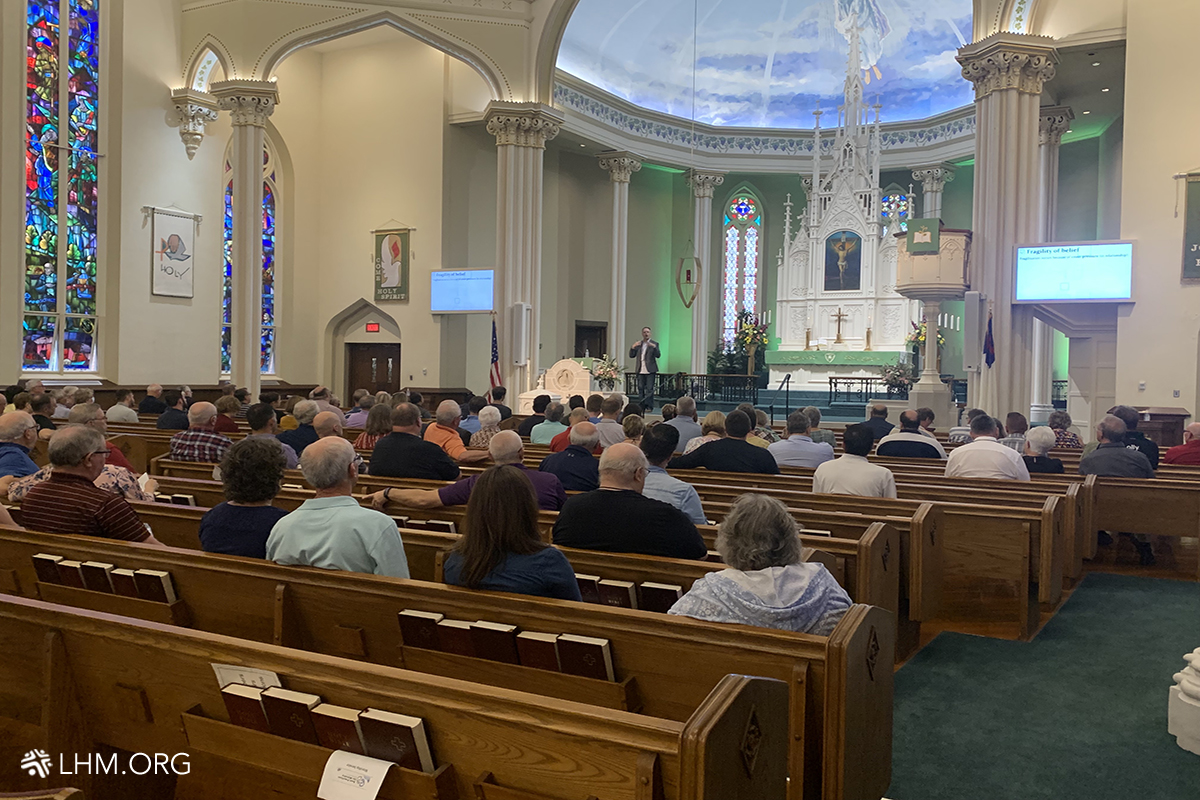 Rev. Dr. Chad Lakies, LHM's regional director for North America, led a keynote session at the Best Practices for Ministry Heartland conference this fall. His keynote message spoke to reaching out post-pandemic but also within our post-Christian world. Below is a synopsis of Dr. Lakies' presentation.

It's not uncommon to hear church leaders describe our present reality as a time of "exile." Harkening back to God's people and their exile in the land of Babylon, the church is compared to living in a cultural setting that, while not always hostile, is often unreceptive to the message of the Gospel.

So how does one reach out in a time such as this?

Understanding the times is a good place to begin. We often use the word "secular" to help us characterize our times. But what exactly do we mean?

The philosopher Charles Taylor offers three helpful definitions of "secular" that are useful for the church. To get a sense of our times, we need to pay close attention to Taylor's three definitions.

SECULAR: WHAT WE USUALLY MEAN
Taylor starts by outlining the two most common senses of the term. In the first sense, "secular" has come to refer to how religion has moved into the private realm, receding from the public square. That is, we often think about our religious beliefs as just between "me and God." What one believes is not anybody else's business.

Thinking of how religion's influence has receded from the public square, we might think of how Sunday used to be the most sacred day of the week, set aside for religious purposes. But now, it's almost as if Sunday is no different from any other day of the week. Sundays are often just as full of soccer practices, gymnastics competitions, and many other such activities. Church leaders often lament this development in American society. All these extra events and opportunities compete with the usual religious services and other sacred observations that have long been reserved for Sundays.

Taylor's second sense of the word "secular" refers to the decline in religious participation that we're experiencing in our churches. A number of social surveys has been reporting a rather precipitous decline in religions participation for the last 20 years. Additionally, those same surveys are also reporting an increase in those who claim no religious affiliation, often called "nones."

When we combine these two senses of the term "secular," we often end up with a bleak picture of the world where it looks like religion is disappearing. That's the sort of thing that makes Christians worry, especially parents and grandparents, for whom it is important that the faith they've believed for a lifetime be carried on by later generations.

SECULAR AS OPPORTUNITY?
If we live in a so-called "secular age," the sense that religion might be disappearing makes us nervous, perhaps even fearful. But what do we do about it?

To begin to answer that question, let's set aside these two more common meanings of the term "secular" for a moment. It'll take some fortitude to do this, because we've been using "secular" in just these ways for so long that we've come to take for granted their usefulness.

But what if I told you that setting this aside and thinking about the term "secular" differently might open us up to possibilities for outreach that we haven't been able to imagine before? What if living in a "secular age" isn't so scary after all, but a time of opportunity and hope? What if religion isn't actually disappearing, but that we just have to look a little more closely to see it?

A little more than two decades ago, the Lutheran sociologist of religion, Peter Berger, began to talk about the "desecularization" of the world. It's taken a little while for his ideas to catch up with the rest of us, but he suggested quite some time ago that things are not quite what they seem, even though social surveys, prominent pastors, or popular authors have long been describing our world as becoming less religious, and perhaps more anti-religious.

In fact, Taylor's third sense of "secular" gets at this. While his first two definitions validate the sense that religion's place in the world has shifted, Taylor is most interested in why that has happened. The animating question of his book, A Secular Age goes something like this: how did we in the West go from a time, say, in 1500 (Martin Luther lived during this period) during which Christian faith was nearly universally believed, to now, when faith seems like merely one option among many?

IMPLAUSIBLE
Taylor's answer is his third definition. He says what we should really mean when we call our age secular is that beliefs of many sorts have become "implausible." That is, generally speaking, it is difficult to believe. We are haunted by doubts. Beliefs are contested. We wonder-perhaps only privately at times-if what we believe, teach, and confess is really true. We are challenged by the lives of other people who believe, teach, and confess something different from us. We ask, why my way and not theirs?

Taylor is trying to be sensitive about this phenomenon. He believes implausibility addresses both the experience we have of how belief in Christ and Christian faith in general seems to be in decline, as well as what seems to be the growing number of options that count as religious faith in the world around us. From his view, he would agree with Berger-religion doesn't seem to be going anywhere, but he is clear-eyed about how it is undoubtedly changing.

NEW TERRITORY
If implausibility is the challenge we are facing, then this is indeed new territory for considering how best to do outreach and evangelism. In fact, it's one of the reasons that LHM has been promoting a relational approach to evangelism. Part of the challenge of implausibility is that people need to see a faith lived out, made plausible (believable) before their eyes by people who are not just paying lip-service to a set of beliefs but actually living according to them-it is this experience that opens opportunities for having spiritual conversations and perhaps sharing your faith.

But there's more. One of the big challenges that spurs a sense of implausibility is that we who live in the West have grown up in a world that has shaped our imagination to think very scientifically. Most of the time, this is very good. Science is helpful to us and we rely on such knowledge constantly. Yet, because science is limited to studying the things of this world, our framework for thinking about reality is often limited to thinking in almost exclusively this-worldly terms. At times, we even unwittingly adopt the assumption that the world itself can be explained on its own terms, without reference to God. It's as if those of us who live in Western society operate with an imagination that sees the world as enclosed, cut off from the transcendent, disenchanted. This too makes belief difficult, implausible.

CRACKS IN THE SECULAR - TOWARD PLAUSIBILITY
Yet there are signs that even though we tend to operate with such an imagination, "cracks" in the secular still allow the light to break through. That is, despite the challenge of implausibility, humans continue to have experiences and even longings that seem to resonate only when understood with reference to the transcendent, to an enchanted creation, to God who not only exists but cares for us.

Looking for these "cracks" in the secular, as it were, is another helpful way of prompting spiritual conversations in our secular age.

For example, consider the pop-culture phenomenon of movies, stories, TV-series, video games, and more that feature enchanted worlds filled with magic and powerful beings, dramatic conflicts between good and evil, light and darkness. The Harry Potter series, Star Wars, Game of Thrones, Lord of the Rings, the Marvel and DC Comics superhero films, and so many more. Why are they so popular? Why do we love them so much?

Take note that these stories, films, video games, and TV shows depict an enchanted reality. Perhaps one simple answer for why we love them so much is that we long for our reality to be so enchanted, almost as if we were made for such a world. Maybe they're so popular because indeed, we are made for just such a world. We could even say that we miss it.

Yet, in our secular age, our imaginations have been purged of the ability to think about reality in this manner. While we might believe, teach, and confess that in the heavenly realms, angels and demons are at war for the future of human souls, we don't think about this fact as we pass through the various spaces of our world where this battle is ostensibly happening. We often don't even think of our own church buildings as places of spiritual warfare. Or to use another example, we don't look at the rainbow and see it as a sign of God's promise, but instead see the refraction of sunlight through the falling rain droplets. Our own imaginations are disenchanted.

Perhaps our longing for an enchanted world opens a space for spiritual conversations. These longings are what I mean when I talk about "cracks" in the secular. They are moments when the light can break through, when faith can become plausible because it gives legitimacy to the longings we experience.

We can look for other cracks, too. The birth of a child is an experience that requires an imagination capable of incorporating a sense of the miraculous. Experiencing the grandeur of creation through any number of outdoor activities often inspires a sense of gratitude-as if there ought to be someOne to thank. Believers are not the only ones who find belief difficult-even skeptics at times doubt their doubts.

OPEN DOORS FOR SPIRITUAL CONVERSATIONS
Each of these cracks offers an opportunity for spiritual conversations. To engage in looking for them is nothing other than what we describe at LHM as "discerning the spiritual posture" of our conversation partners. But it's a unique way of doing so because it works from the assumption that common human experiences and longings tend to reveal something that's true about all of us, thus opening a door for talking about faith using common ground.

Of course, none of what I've said so far gets us all the way to faith in Jesus. But it does get us to the point of opening a door in which conversations about Jesus and His relevance for our lives is possible. May the Holy Spirit lead you to introduce others to Jesus as He opens doors for sharing your faith, for shining your light through the cracks in the secular.

To learn more about discerning the spiritual posture of our conversation partners, visit lhm.org/curve.

The title of this article was inspired by James K. A. Smith's article found here.