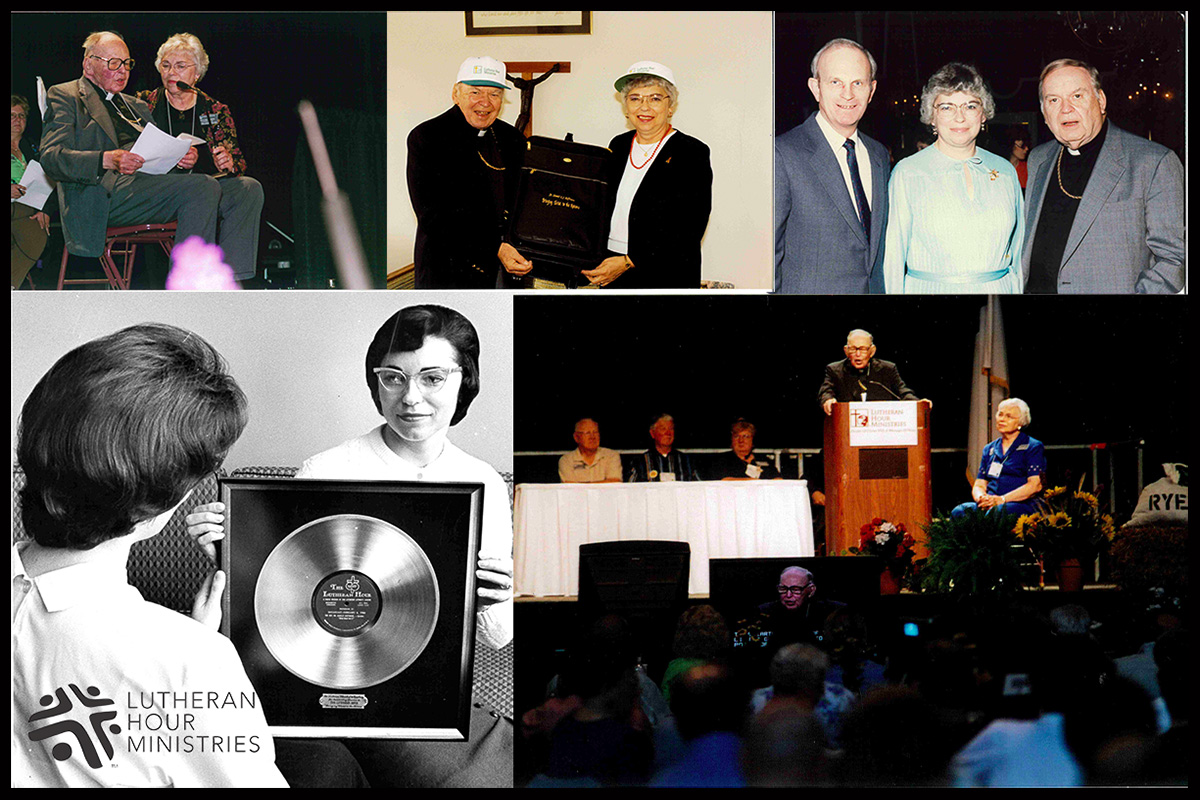 After 54 years of dedicated service to the International Lutheran Laymen's League/Lutheran Hour Ministries, which began in September of 1953, Gaylene LaBore will retire at the end of May. Gaylene held several roles for the LLL/LHM during her tenure, including serving as executive assistant for two Speakers of The Lutheran Hour (Dr. Hoffmann and later Pastor Klaus) and several executive directors before finishing her LHM career as a part-time receptionist. In between, she took off a few years to raise her family!

Born in the small town of Davenport, Nebraska (near long-time Speaker Dr. Oswald Hoffmann's hometown of Snyder), Gaylene's parents were very active in the LLL. After moving to Idaho, Gaylene's father became district president of the Utah-Idaho LLL and took the family to a national LLL convention where she first met T.G. Eggers. Eggers was the first full-time employee of the LLL and had a long management career within the League. He had never met Gaylene, and didn't even know if she could type, but asked her to come to work for him since his current secretary would be leaving after getting married. Teenage Gaylene boarded the Union Pacific train in Idaho with her friend, who also got a job at the League, for the long trip to St. Louis, not knowing how her career would evolve.

Arriving to stifling, 103-degree Missouri heat, she and her friend met Eggers for their first visit to the LLL headquarters. Little did Gaylene know, but her future husband was arriving at nearly the same time. "Rev. Richard LaBore came from New York to start his studies at Concordia Seminary on the same weekend I arrived in St. Louis from Idaho, but it took a few years before his East met my West," Gaylene recalls. 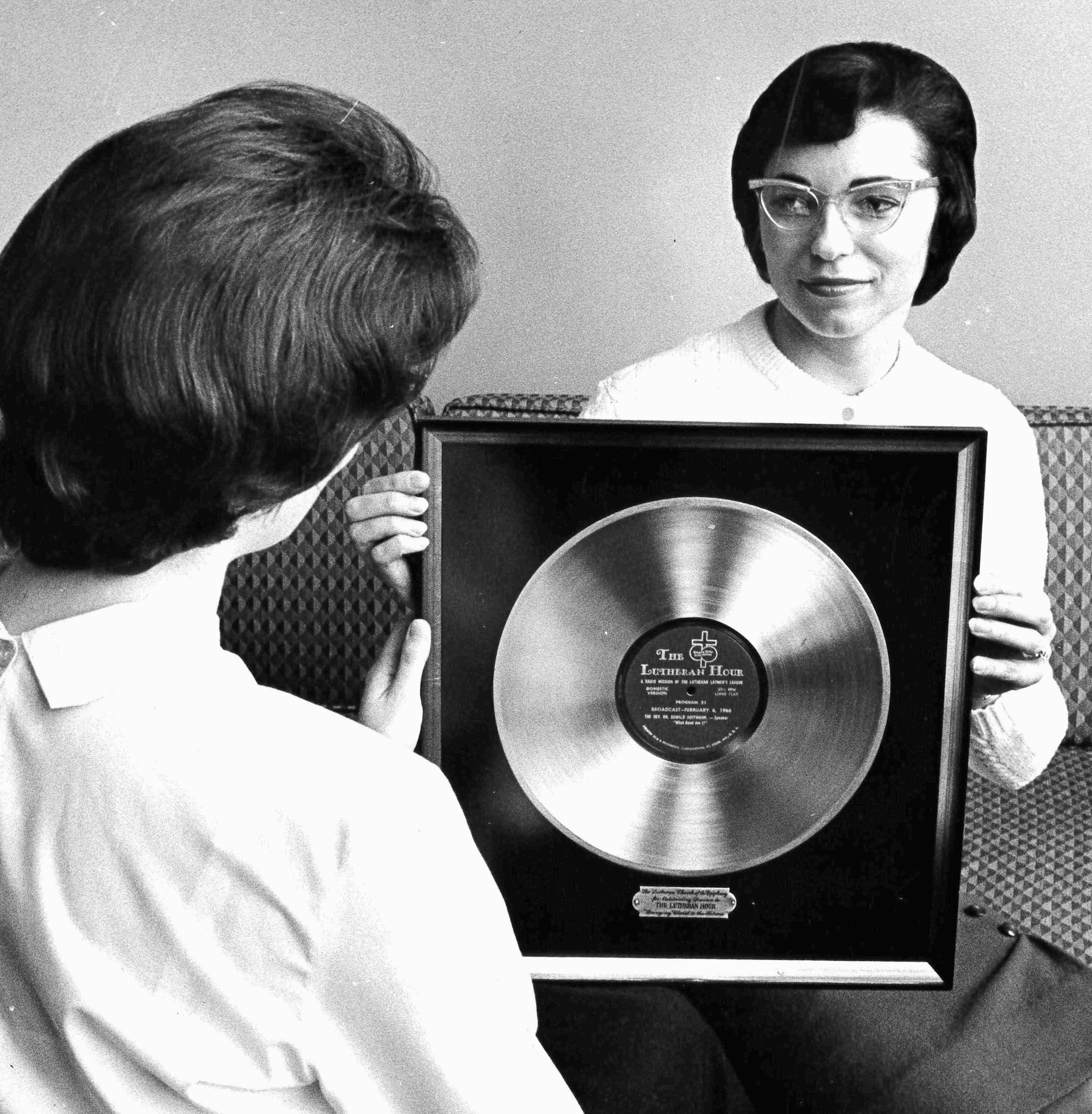 She began her career working with executive director Eggers and then Edgar Fritz, the director of club services, before Dr. Hoffmann moved to St. Louis in 1963. Dr. Hoffmann had been named Speaker of The Lutheran Hour eight years earlier but had stayed in New York to also maintain his position as the Synod's Director of Public Relations. He would record sermons in New York and ship them to St. Louis for the music and other pieces to be added.

When Dr. Hoffmann moved to St. Louis, he came with a multitude of filing cabinets but no assistant. Even though she enjoyed working with Fritz, Gaylene quickly became the clear choice to fill the new role. "I took care of his calendar and made all travel arrangements, typed sermons, reports, much correspondence, and took care of a lot of details," says Gaylene. "It was an enjoyable job and certainly my great privilege to serve the Lord with Dr. Hoffmann all those years! My husband and I became quite a team serving Dr. Hoffmann and his family on a more personal level!"

"Dr. Hoffmann traveled to many countries for The Lutheran Hour and other organizations, so it was interesting for me to write to, meet, and talk to these people from all over the world," she says. "I was fortunate to travel to some of these places with him. Wherever he was, he was always known as the Lutheran Hour Speaker! In addition to the many tours he led for the LLL to Bible lands and Luther sights, he served with Rev. Billy Graham, met with four U.S. Presidents, attended the Vatican Council twice in Rome, did a lot of preaching for Military installations around the world, including the Pentagon and four Christmases with the troops in Vietnam. He also served in leadership positions with the American Bible Society, including the Translation Department, and the more than one hundred Bible Societies around the world. He would send me dictation from wherever he was and I could sometimes hear monkeys in a tree or other noises if he was dictating from the desert, forest, or another remote location."

Of all her experiences serving with Dr. Hoffmann until his death in 2005, one thing stands out. "He did not know the word 'no' and accepted every possible engagement he could," says Gaylene. "He was a very good fundraiser and people just opened up their wallets and gave to The Lutheran Hour when he came into the room!"

As she prepares to retire a second time (she originally intended to retire in 2007 until Larry Lumpe returned to LHM as Executive Director and asked her to serve as his assistant), the memories from more than a half century of service come racing back.

"One of the real blessings of working at LHM are the contacts I've had with so many wonderful people from across the United States and all over the world who are helping with our exciting mission," says Gaylene. "Our files are full of beautiful letters from people who, beginning with the first broadcast from Dr. Maier to Dr. Zeigler today, have written in appreciation and thankfulness for the great job our Lutheran Hour speakers do in bringing the Gospel message in such a clear and helpful way to people who have never heard of Christ. It's amazing!"

LHM employees will miss seeing her friendly face behind the receptionist desk, connecting through mutual friends, and sharing favorite travel memories. "I will certainly miss the daily contact with the many friends I've made here in the building," says Gaylene. "We have a good staff and a lot of new things going on in different parts of the world where it isn't possible to broadcast The Lutheran Hour as we knew it before. It's exciting to see how the Gospel is still getting into those parts of the world through new electronic ways."

As for what's next? "My husband and I will continue to be involved in projects at our church (where he serves as Interim Pastor), and other committees and organizations for which we volunteer, still love to travel, and will spend more time with our children and grandchildren as the Lord continues to bless us!"