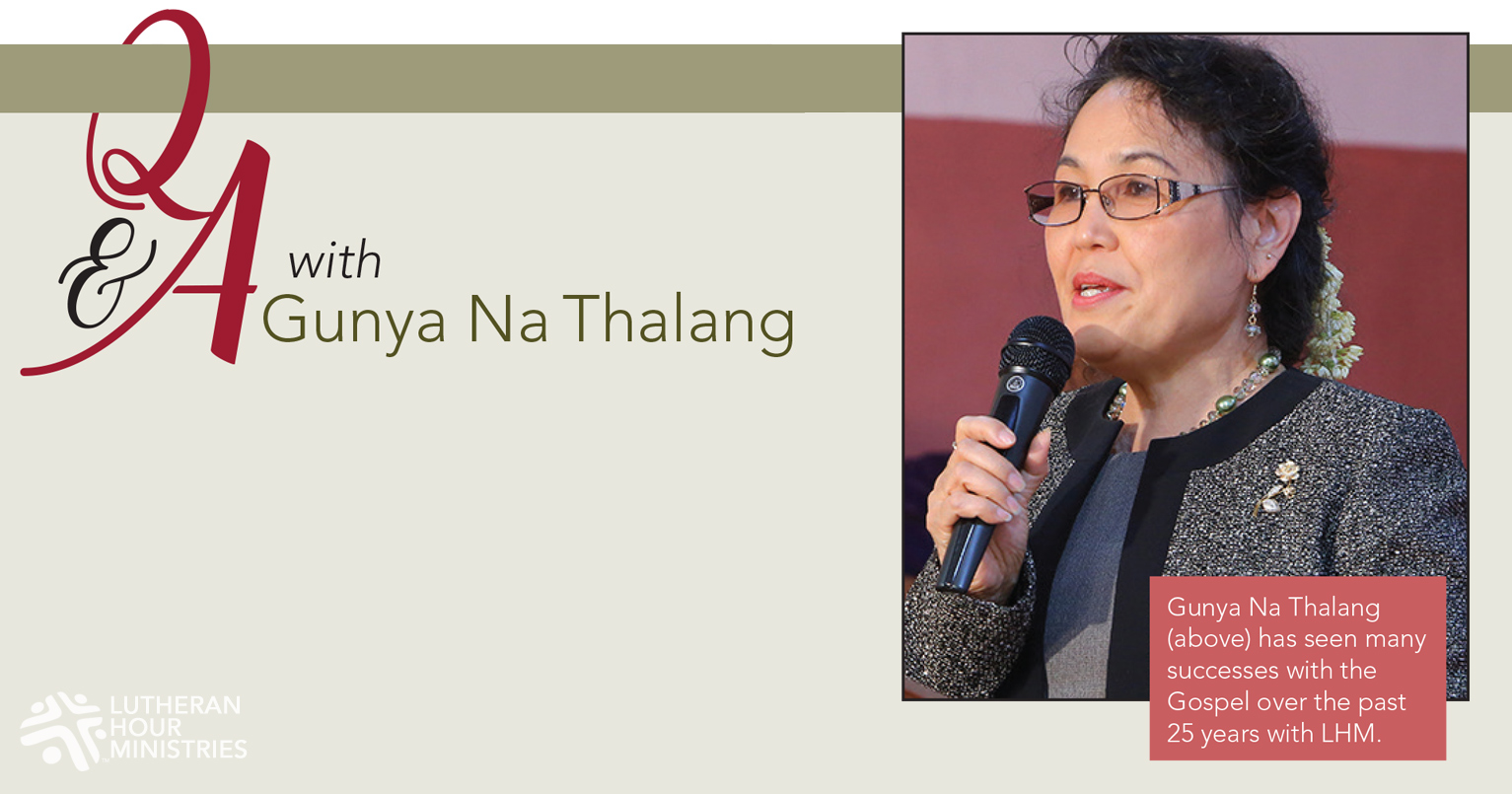 Often it takes a special person to do a special job. Gunya Na Thalang is one of those people.

Recently, in this her 25th anniversary year with Lutheran Hour Ministries, she dedicated time to be interviewed by the editor of The Lutheran Layman. Since 2002, Gunya serves as Regional Director for Asia for Lutheran Hour Ministries (LHM). As such, Gunya nurtures the development, expansion, and promotion of LHM's reach in Asia through high-impact programming and focused distribution of materials. The results are admirable as significant responses, referrals, and connections result.

By now you may guess that Gunya has roots in Asia, specifically in Phuket, Thailand. She earned her Bachelor of Education degree at Srinakarinwirote University in Songkla, Thailand, and her Master of Education at Chulalongkorn University, Bangkok. Her exposure to American culture deepened as she completed the colloquy program at Concordia University, St. Paul, Minnesota, in 1990. From November 1991 to May of 2002 she had connections with LHM as director of LHM-Thailand, known locally as Journey Into Light.

Gunya, how did you come to faith in Christ, and how did that change your life?

"I was born and raised as a Buddhist, like most people in Thailand. During my childhood, my parents taught me to try very hard to do good deeds to earn as much merit as possible, so that I could pay off my bad karma from 'my previous life,' for this life and for my next life. I lived with fear that I never earned enough merit and that bad spirits would harm me. I was afraid that if I died, I would go to hell to be punished for all the sins I had committed.

"When I was 27 years of age, the Holy Spirit led my husband to introduce Christ to me. By the grace of God, I came to know Him to be my Lord and Savior. From then onward, my life was completely changed. Now I live my life in and for Him with His love, hope, peace, and joy. I no longer fear that I'll be punished in hell. I have no worries about my next life, because Jesus has paid for my sins and has promised to take me to live with Him in heaven."

How has this changed the lives of others through your work?

"I humbly thank God for calling me to serve Him with LHM for more than 25 years. Through my former work as the director of LHM-Thailand and now regional director for Asia, I have seen many people come to know Christ and receive Him as their Savior and Lord.

"For example, in Thailand hundreds of people have heard the Gospel and have been connected to local churches through radio outreach programs I hosted. Among thousands of listeners who heard my programs over the years, one example stands out. Nucha and his mother started to listen to my radio program-and God changed their lives forever! They began coming to our church and later were baptized. Nucha enrolled in a theological school five years later. Now he and his wife are serving at Into Light Lutheran Church in Bangkok."

What are three very exciting LHM achievements that happened in the last two years?

"With the help of the Holy Spirit, I successfully reopened the LHM ministry center in Laos. I oversaw the printing and distribution in China of the book, The Christian Faith-A Lutheran Exposition by Robert Kolb in simplified Chinese characters. I helped to coordinate the 65th Anniversary of LHM-India."

What is your hope for the future?

"God willing, I would like to expand Lutheran Hour Ministries in many more countries in Asia."

Note: Rev. Ted Na Thalang adds to the couple's depth for outreach. Born into a Buddhist family, he relocated to Indiana in 1968 where he was baptized. He holds a degree in business earned in Indiana and a Master of Divinity degree from Concordia Seminary, St. Louis. He is active in Lutheran Church-Missouri Synod Gospel work in Asia, even working on translating Luther's Small Catechism into Vietnamese, Cambodian, Lao, Indonesian, and Burmese.