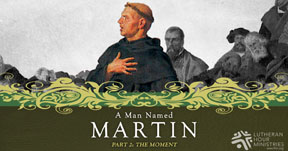 A Man Named Martin -- Part Two: The Moment is a three-part video Bible study that examines the wayward theology, faulty teachings, and widespread doctrinal errors of the late Medieval Church. It was against such Church abuses that Martin Luther and other reformers pushed for a return to Scripture as the only true authority. Ultimately, Luther's 95 Theses and his hard-fought debates with Catholic Church hierarchy set in motion a theological overhaul of the existing order.

As a follow-up to 2015's A Man Named Martin-Part One: The Man, this new study takes a close look at Catholic Church teachings like purgatory, penance, celibacy, prayers for the dead, transubstantiation, the treasury of merits of Christ, devotion to Mary and the rosary, the institution of the Papacy, and the one Luther had a bitter distaste for: the sale of indulgences. Examining these and the antecedents leading up to their inclusion in the Church are Dr. Paul Maier, Dr. Ken Schurb, Dr. John Nunes, Dr. Joel Lampe, Dr. Susan Mobley, Dr. Joel Biermann, host Dr. Gregory Seltz, Speaker of The Lutheran Hour, and others.

A Man Named Martin -- Part Two: The Moment includes a discussion guide and a companion booklet, The Reformation Twelve, which highlights a dozen individuals who played principal parts in the widely scattered events and circumstances that led to the Reformation. .

Special Offer! For a limited time, order your copy of A Man Named Martin--Part 2: The Moment on DVD for $15 (plus $4.95 shipping and handling) and receive five FREE copies of The Reformation Twelve! Visit lhm.org/martin16 and enter the promo code NLMARTIN16 to order. The offer is available only in the United States and ends Sept. 30, 2016.