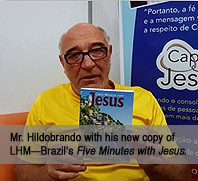 "I realized that if God sacrificed his only Son to save me, how can I think about suicide?"

Mr. Hildobrando had been through what people often refer to as a rough patch. During his wife's battle against cancer, he had spent a lot of time with her at the Hospital Beneficência Portuguesa in the city of Pelotas. Last year his wife lost her battle with the disease.

"After my wife was gone, I was so sad, and this drove me to thoughts of suicide," he recalls.