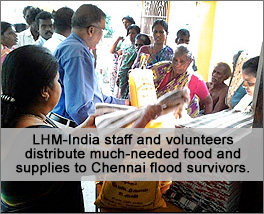 Between November 9 and December 6, southern India—in particular, the states of Tamil Nadu and Andhra Pradesh&#8212experienced the region's heaviest rains in a century. One of the hardest-hit areas was Tamil Nadu's capital, Chennai, a city of 6.7 million people, which suffered severe flooding. An estimated 500 deaths have been attributed to the floods; approximately 1.7 million people were displaced in Chennai and Tamil Nadu; damage estimates range from 3 billion to 15 billion U.S. dollars.

According to LHM—India Director Rev. C. David, the LHM ministry center building in Chennai was not flooded, although flood waters reached up to the center's property, and the loss of electricity and telephone service to the building hampered ministry activities. Four of the center's staff members live in an area where the water level reached 6 to 7 feet and were forced to leave their homes.

With support from LHM's St. Louis headquarters, Lutheran Hour Ministries—India mounted an effort to reach out to affected families with emergency food, clothing and shelter materials. On December 8, LHM—India kicked off its holistic outreach by providing relief packages to 450 families. Rev. David says the center is equipped to help up to 1,000. In addition, LHM—India has begun a series of three medical camp events to assist flood survivors with their health needs.

"We gratefully acknowledge and convey our thanks to our leaders at LHM for their generosity, which enabled us to show the love of Christ to many thousands in their distress," says Rev. David. "In the month of December we hope to complete the distribution work of flood relief materials."

You can learn more about the work of Lutheran Hour Ministries—India at lhmindia.wordpress.com.