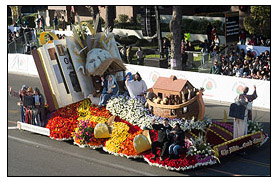 The 2015 Rose Parade float sponsored by Lutheran Hour Ministries&#8212and the only Christian-themed entry among 37 floats participating in the Jan. 1 parade in Pasadena, California—received the Princesses' Award trophy for "Most Beautiful Float 35 Feet and Under." The float, under the theme of "The Bible ... God's Story," depicted an open Bible, inviting viewers into the Word of God with inspiring stories of faith that burst forth from its pages. Highlights included:

• The story of the Baptism of Jesus who, as he was coming up out of the waters of the Jordan River, was acclaimed by the Father of Life as the beloved Son of God.
• The story of Moses who, despite the awareness of his own shortcomings, became God's instrument of deliverance as he led God's people out of bondage in Egypt.
• The story of the Nativity and the faith of a young woman named Mary who found favor with God and gave birth to Jesus, the Savior of the world.
• The faith of Noah who heard God's call to build a great ark and, despite the craziness of this calling, saw it through.

As a self-funded project of the Southern California District of the International Lutheran Laymen's League (Int'l LLL), the float is a 65-year tradition in the annual New Year's Day parade, carrying on a mission to provide a Gospel witness to viewers everywhere, from the parade route along Pasadena's Colorado Boulevard to televisions all over the world. The parade, which also included marching bands and equestrian groups, was watched live on television by some 40 million Americans and by millions more people in 150 countries.

Around 5,000 Petal Pushers volunteered this year to decorate the LHM float as well as six other floats for American Honda Motor Company, the City of Los Angeles, Western Asset Management Company, Farmers Insurance, Shriners Hospitals for Children and the United Sikh Mission. For more information about the work of the Petal Pushers, visit www.petalpushers.org.