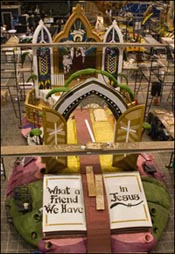 Take a stand for Christianity by voting for the Lutheran Hour Ministries float in the Viewers' Choice Awards for the Tournament of Roses Parade in Pasadena, California. The annual LHM entry is the Rose Parade's only religious-themed float and offers a Christian witness to a worldwide audience of about 450 million people—including an estimated 1 million who attend the Parade. The Viewers' Choice Award allows Rose Parade fans to choose their favorite float by voting online or via text message. This year all broadcast outlets will also have an opportunity to participate in the process for the Viewers' Choice Award.

The Lutheran Hour Ministries float is listed under "Lutheran Laymen's League" and its float identification number is 44. To vote for the LHM float, you can go online Jan. 1 to www.tournamentofroses.com/viewers-choice-award or text FLOAT44 to 50649. Fans can vote up to five times for their favorite float between 8 a.m. Pacific Standard Time and 2:10 p.m. Pacific Standard Time on Jan. 1, 2011. There is no charge to vote, but message and data rates will apply if texting.

The theme for the 2011 Pasadena Rose Parade is "Building Dreams, Friendships & Memories" and this year's LHM float theme is "What A Friend We Have In Jesus."